Throughout the month of October, TinyEYE employees sent facts about Breast Cancer to one another via email. Some of these facts were of personal nature; others were researched. What stands true for all of these facts is that breast cancer is both very common and dangerous, and deserves attention for more than one month of the year. Here are the facts that our TinyEYE employees shared with one another.

2. Did you know that 1 in 8 women will be diagnosed with breast cancer in their lifetime? Because of screening and improved 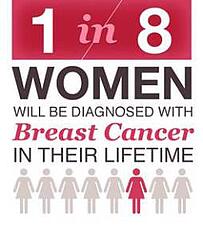 treatment, over the last 20 years the death rate from breast cancer has been decreasing by 2.5% per year.

4. “Risk factors of breast cancer may be divided into preventable and non-preventable. Their study belongs in the field of epidemiology. Breast cancer, like other forms of cancer, can result from multiple environmental and hereditary risk factors. The term environmental, as used by cancer researchers, means any risk factor that is not genetically inherited.

For breast cancer, the list of environmental risk factors includes the individual person's development, exposure to microbes, "medical interventions, dietary exposures to nutrients, energy and toxicants, ionizing radiation, and chemicals from industrial and agricultural processes and from consumer products...reproductive choices, energy balance, adult weight gain, body fatness, voluntary and involuntary physical activity, medical care, exposure to tobacco smoke and alcohol, and occupational exposures, including shift work" as well as "metabolic and physiologic processes that modify the body's internal environment." Some of these environmental factors are part of the physical environment, while others (such as diet and number of pregnancies) are primarily part of the social, cultural, or economic environment.

THE FACTS: Men have breasts and can develop breast cancer. Their risk, however, is very low, with fewer than one per cent of all breast cancer cases in Canada occurring in men. Despite the small number of cases, breast cancer in men is not well understood, stigmatized, and may be misdiagnosed or diagnosed at a later stage.

Men, like women, are encouraged to be breast aware and discuss any unusual changes in their breasts with a health care provider.”[3]

6. The first noticeable symptom of breast cancer is typically a lump that feels different from the rest
of the breast tissue. More than 80% of breast cancer cases are discovered when the woman feels a lump.[9] The earliest breast cancers are detected by a mammogram.[10] Lumps found in lymph nodes located in the armpits[9] can also indicate breast cancer.

Indications of breast cancer other than a lump may include thickening different from the other breast tissue, one breast becoming larger or lower, a nipple changing position or shape or becoming inverted, skin puckering or dimpling, a rash on or around a nipple, discharge from nipple/s, constant pain in part of the breast or armpit, and swelling beneath the armpit or around the collarbone.[11] Pain ("mastodynia") is an unreliable tool in determining the presence or absence of breast cancer, but may be indicative of other breast health issues.[4]

THE FACTS: Just 5 to 10% of cases are due to faulty breast cancer genes BRCA1 and BRCA2. Even in women who have a family history, many cases are due not to specific gene mutations, according to the American Cancer Society, but, rather, to a combination of shared lifestyle factors and genetic susceptibilities. The truth is that scientists still have no idea what causes breast cancer, but new research is shedding light on what makes cancer return.[5]

8. A study found that women with early-stage breast cancer who had low levels of vitamin D were more likely to have their cancer come back in a distant part of the body and had a poorer outlook. More research is needed to confirm this finding, and it is not yet clear if taking vitamin D supplements would be helpful. Still, you might want to talk to your doctor about testing your vitamin D level to see if it is in the healthy range.[6]

Something quite frightful is that the American Journal of Clinical Nutrition reports a higher risk of breast cancer in women who take multivitamins.

Some good news though is that Research has found that pomegranates may help prevent breast cancer. Chemicals called ellagitannins block the production of estrogen, which can fuel some types of breast cancer.[7]

9. Some days, there won’t be a song in your heart. Sing anyway. ~ Amory Austin

Today is my day to share a story about breast cancer. As I did my research, I found so many facts about prevention, identification, stages, surviving and ‘losing the battle’. Then, my heart took me to a time when I lived in Guelph and was a member of my company’s Dragon Boat rowing team. Our yearly competitors were the Breast Strokes. At first, they were just another group of ladies - moms, sisters, friends – that we would have to beat on the water each spring. Soon I learned that there was something unique about this relentlessly competitive, high-spirited group…each of them had lived with breast cancer and some of them were still immersed in their treatment. I remember peeking over at them during our races – I would see the unbreakable determination on their faces as they pushed forward. At the finish line, I would see them raise their arms in triumph and camaraderie. They gave me an education in living with purpose and in making the choice to find joy, rather than despair or anger.

It was my last race with my team before I moved to Alberta. We all carried a rose into the boat with us. We launched our boat and lined up beside our regular competitors – the Breast Strokes. We fought a fierce battle against them. Then, there was silence as all of the ladies in all of the boats held our roses high in the air and then placed them in the water. This was to honour the team mate who didn’t make it back to the race that year. Breast cancer.

I have shared a link that shows the current members of the Breast Strokes taking their brand new boat for a ride in Guelph Lake. See the video at the bottom. Perhaps a message is that when something as terrible as breast cancer creeps into our lives, we are so much stronger when we paddle together.

THE FACTS: There is currently no conclusive link between cell phone use and the increased risk of breast cancer. The International Agency for Research on Cancer concluded in 2011 that radiofrequency fields, such as those from cell phones, may cause cancer but more research is needed before this is confirmed.

If you are concerned about cell phone use and the possible link to cancer:

11. With a different style and not presenting from documented research, a very close friend of mine had her routine mammogram performed in April 2010. Three months later she experienced pain in her breast. She went to the doctor and they attributed it to a blow she had received in the chest from a ball that had previously hit in the same area. The pain continued and after further investigation a couple of months later, she was diagnosed with breast cancer stage Unfortunately, she passed away December 26, 2012. My friend, Donna Fernekes, would want me to share the importance of self-breast exams, which can be more reliable than mammograms. After talking to the Radiologist about Donna after my last mammogram, he told me that many people note changes when performing regular self-breast exams and request a mammogram. Often, what a patient identified as being unusual cannot be consistently identified from a mammogram. With a patient reporting their own observations and a mammogram not confirming anything usual, further measures are then taken (i.e. MRI) to determine if there is a diagnosis of breast cancer.